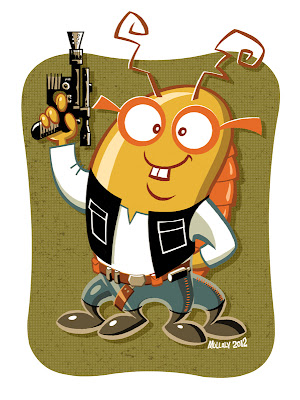 The happy little fellow pictured above, with a striking resemblance to a certain space pirate from the moving pictures, is not trying out out his new Halloween costume (actually, he might be... I didn't ask him!). He is, in fact, the GlenMullaly.com mascot Pablo the Pill Bug, as he appears in a sneak peak of a  charity fundraising print collaboration between myself and my pals comic book Hall-of-Famer Ken Steacy, and Perogy Cat man Gareth Gaudin.

The print will be for sale (all funds going to charity) at the upcoming Victoria's Ultimate Hobby and Toy Fair on Oct 14th. If you haven't attended before you should check out this ever-growing cross between a comic con and a toy show. Amazing new and collectable toys, comic, dolls, records, models, video games, etc... combined with costumes, fantasy and sc-fi oriented vendors, clubs and displays, and comic book artists, writers and others (like me) as special guests.

If you haven't caught on by now, Pablo is dressed as Han Solo in the Star Wars-inspired print due to another guest at the upcoming show: voice artist, writer and producer Jim Henshaw (voice of Wicket the Ewok from the animated series, among many other characters - including some Care Bears for those 80s kids out there).

See you there!
Posted by Glen Mullaly at 4:00 PM