Star Wars and Me 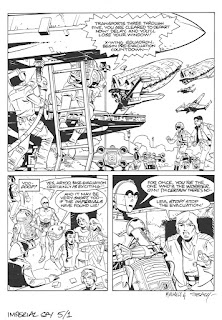 For some unknown reason folks are talking about Star Wars a lot this week. The din is pretty overwhelming, so I've limited my mentions of that space movie series on the interwebs for good reason. But if you permit me this one indulgence I promise I won't make it a regular occurrence.

I consider myself to have had three small contributions to the greater Star Wars world... 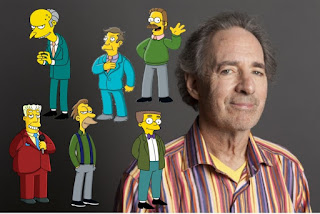 The first would be the fact I was the first, that I've been able find, to suspect (mid 1990s) confirm (around 2000 by email with Mr. Shearer) and publish (on Wookipedia in the early 2000a, but it was removed after a few years as being "original content") the for-some-reason unknown trivia that Harry Shearer - Simpsons, Spinal Tap, Le Show - looped (replaced the voices of) three actors in the original 1977 Star Wars. Shearer was hired, before he was as well known as he was to become and in his "penurious days", along with a number of LA area DJs and voice actors to replace original British accents of actors playing minor characters with American ones. Shearer's voiceover work was for a Star Destroyer officer near the beginning of the film reporting to Darth Vader on the Blockade Runner ("There's no one on board, sir..."), a different Imperial character a little later commenting on the escape pod ("There goes another one..."), and a Rebel pilot during the attack on the Death Star. Others have picked up on one or two of these since, but as far as I can tell I was the first to write about this. Scroll down to near the bottom of this post for more info on it. 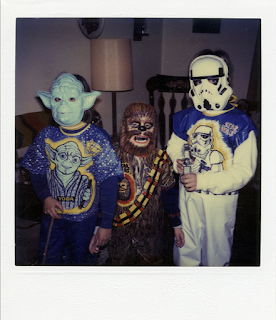 Along with cofounders Todd Franklin and original idea man Mike Middleton I started the Growing Up Star Wars group on the photo sharing site Flickr (back when it was a fun place to share and socialize) in 2008. With over 1600 members sharing their vintage (1976 to 1985) photos, drawings, and other images it's an amazing place to soak in the fun, more innocent vibe that permeated the original Star Wars craze. Interest in the group grew quickly, with articles and shout outs from sites like Time Magazine and the writers of the Simpsons tv show. Todd and I were encouraged to spend a year putting together a mass market book (along with a major book packager) based on the group and negotiated a deal with a major publisher. Unfortunately it fell apart at the last minute when Lucasfilm pulled their tacit approval due to a conflict with another book they were planning on publishing around the same time.

After being a big fan of Marvel's Star Wars comic book series as a kid from 1977 to the early 1980s (when I stopped collecting comics) it was really an honor to work on official Star Wars comics (and children's books) from 1996 to 2000. Lassoed in by legendary comic artist Ken Steacy to at first assist on 11 Star Wars book for kids for publishers such as Random House, Disney, Golden Books and others... 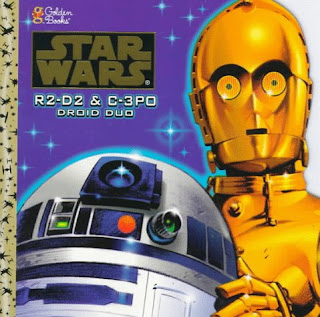 ...and then co-illustrate two serialized Star Wars comics originally published by Darkhorse Comics in Star Wars Kids magazine, and one 64 page mini-comic story originally intended to be included (a chapter at a time) in boxes of a popular fruit snack product for the North American market. 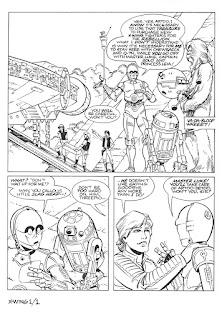 The mini-comic eventually was published online on Darkhorse's website. Both comics were reprinted more recently in the currently out-of-print Darkhorse anthology series Star Wars Omnibus Volumes 1 & 2, collecting obscure Star Wars comics from 1977 to the 2000s. (autographed copies are still available from me in limited numbers - drop me a line!) 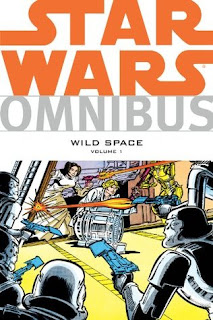 To celebrate (ie: cash-in) on the current marketing mania for all things Star Warsy I thought I'd share three never before seen original art pages from these projects. My original Star Wars comic art was sold in the 2000s, but I made high quality copies of all the art before that, so here are the original black and white inked pages before the titles and coloring was added. Ken did the rough breakdowns (sort of stick figure, rough pencil layouts), I drew the final tight pencil pages and laid in the word balloons and lettering by hand. I then inked (went over the pencils with a brush and black ink) the robots, ships, guns, other mechanical parts, and sound effects - and Ken inked the organic characters and final lettering in the word balloons. I helped color much of the mini comic as well. 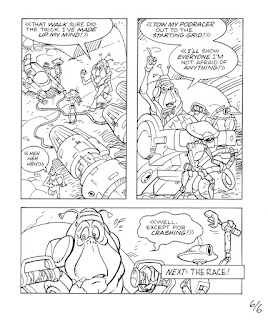 Interest in my Star Wars work has increased over the past few years, so I've gone from barely mentioning it to attempting to respond to the growing demand with autographed copies of the Star Wars Omnibus graphic novels, commissions (original SW themed art for fans have me draw for them), and original art cards (small, original Star Wars themed painted illustrations) like those pictured below... 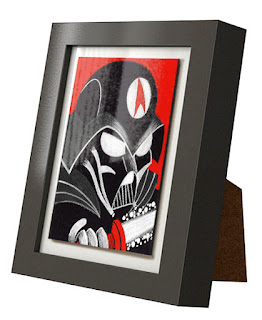 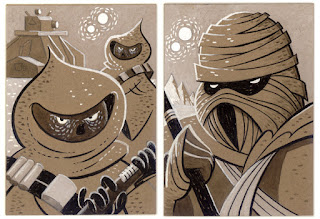 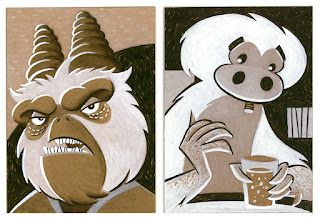 There are a few other minor SW related connections, but for now I thought I'd get down in print my brush (get it?) with the Star Wars universe for posterity. Now if I can just arrange for J.J Abrahms to suddenly develop an interest in hiring me for his next SW movie... 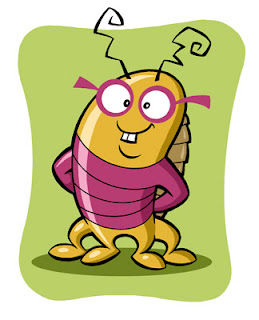 ...And the winner of the two IFCON Victoria 2015 Junior VIP Passes is....
Alison Spokes!
Congratulations Alison, I'll be in touch shortly with details on how to pick up the tickets. Looking forward to seeing you at the show.
Thanks to everyone else who entered the contest. I hope anyone who is interested can still make it to the con - it should be a fun weekend!
https://www.facebook.com/events/1633921223496584/
Posted by Glen Mullaly at 7:50 AM No comments:

CONTEST TIME!!!
Okay gang - how'd you like to win a pair (that's two, I said two!) JUNIOR VIP PASSES (good for adults or children) to the upcoming IFCON Victoria 2015!  IFCON is expected to be Victoria BC's biggest fan / comic / sci-fi / movie / tv / horror / cosplay / steampunk ever, and will be held Saturday, October 31st (Halloween!) and Sunday November 1st 2015 (three weeks away) at Pearkes Recreation Centre in Saanich (5 -10 minutes from Downtown Victoria). Besides entrance to the con for both days, these passes included early bird admission, VIP entrance privileges, priority seating in film rooms, and Q&A panels, free admission to the Sunday after party, and a free convention t-shirt!

Successful winner must pick up tickets in Victoria, and, of course, pay your way - and pay for lodging if from out of town - the tickets cover only entrance and perks listed above.
How to win, you ask? Three ways - if you're on Twitter, but haven't followed my Twitter feed, do so here.
All new followers in the next 7 days will be entered to the contest. If you already follow me or aren't on Twitter you can like my Facebook page here.

Winner of the pair of tickets will be announced in the am on Friday, Oct 16th. Good luck!
(Family and close friends of Glen Mullaly Illustration ineligible to win)
Posted by Glen Mullaly at 7:20 AM No comments: 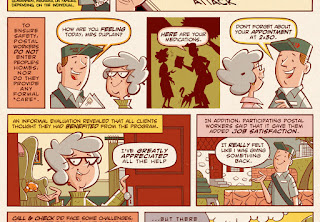 I recently had the pleasure to create an infographic-meets-comic strip style project for the fine folks at the highly respected Commonwealth Fund organization. It's based on a study from the Isle (technically a "Balliwick"!) of Jersey between England and France, where postal carriers checked in on, and helped with reminders and deliveries for, some of the frail elderly population. Really interesting approach. The slideshow and comic strip versions of the project are online now available here!

Posted by Glen Mullaly at 5:36 PM No comments:


I'm pleased as punch to announce that I'll be a guest, as well as participating in "The Art of Drawing for Comics" workshop, at the upcoming IFCON taking place in lovely Victoria, BC over the Oct 31st and Nov 1st 2015 weekend. IFCON will be the largest con that Victoria has ever held and will feature comic book, movie, horror and sci-fi celebs artists and writers (among many other things) from around North America. Keep your eyes on this spot in the next couple of weeks for chance to win a pair of Junior VIP passes (sold out, and valued over $130!) to the con that I'll be giving away!
Posted by Glen Mullaly at 8:38 AM No comments: 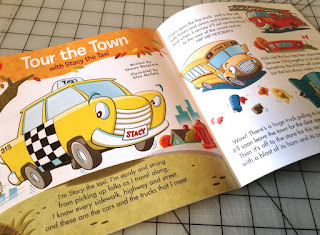 Hey there, parents of young ones in the 3 to 6 year old range - check out the latest issue of much-beloved Chirp magazine (Sept) for a fun, four page story illustrated by yours truly! Brought back by popular demand, this piece won an AEP award when it was first published. At better newsstands, mailboxes (by subscription, of course) and online now!
Posted by Glen Mullaly at 8:30 AM No comments: 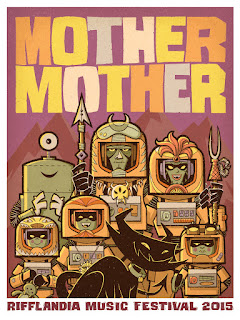 Here's a small preview of the final poster for Mother Mother appearing at the upcoming RIFFLANDIA music festival here in Victoria in September. This high quality, 18" x 24" glicee poster will be available at the three day festival, and afterwards through my online store. Rock on!
Posted by Glen Mullaly at 8:28 AM No comments: