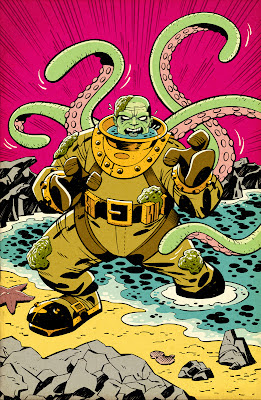 I've been reliving my childhood and adolescence recently working on some illustrations for a comic-book themed kid's book. The images are full-on comic book heroes and villains (like this fishy fellow above) done on comic-book size pages in a slightly retro style.

I'm channeling my inner (and outer, and sideways) Jack Kirby for this job and it's been both fun and a learning process going back to the mindset of my 9 to 16 year-old self who wanted nothing more than to move to New York and draw comics for Marvel (although in a pinch DC would have sufficed). By the time I graduated high school I had stopped collecting comics for a year or two, and soon realized that comic book artist wasn't my path in life - but I have been lucky to work on a number of Star Wars comic-book projects with my pal Ken Steacy in the late 1990's and early 2000s. I've also done some super-hero themed magazine covers and advertising work in the past, but the job I'm finishing up now has been the closest to pure superhero comic work I've done professionally - and it's been fun. 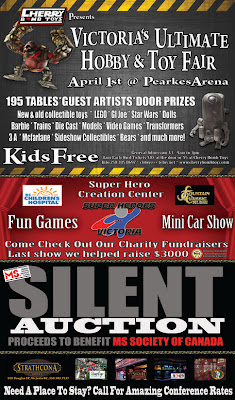 The upcoming Victoria's Ultimate Hobby & Toy Fair is less than two weeks away! Once again I'm invited back as a featured artist - along with the aforementioned Ken Steacy, and Perogy Cat creator and Legends Comics co-owner (voted best comic book store in Canada!) Gareth Gaudin. Despite the name, this show covers a large range of pulp culture interests including toys (vintage and new) comics, movies, video games, fantasy role playing, hobbies, music and tons more. Be sure to stop by and say "hi" if you're in the Victoria area April 1st (no foolin'!) I'll have my prints (hopefully my new ones, and maybe even some large format prints that I've had requests for) and original art (including some of the super heroes and villains from the above project) to show and sell. See you there!
Posted by Glen Mullaly at 5:00 PM